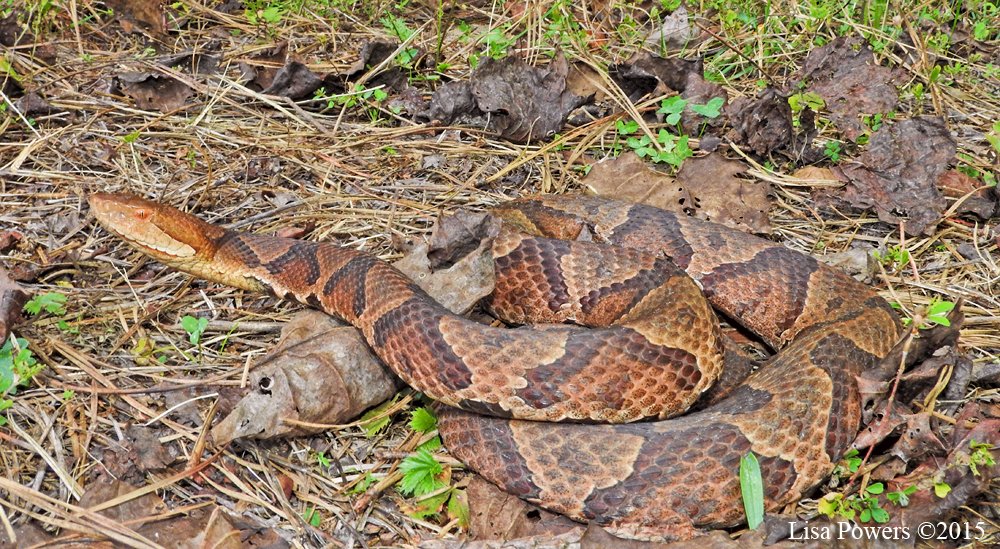 Description: The copperhead is a thick, stout-bodied snake that is between 24” and 36” (61-90cm) long when mature. A record length is 52” (135cm.) Males are larger than females. Juvenile copperheads have a sulfur yellow tail. The body is typically the color of dead leaves of brown or orange and has chestnut brown cross-bands that are wide on the sides and narrow at the backbone. Most bands are connected though some will be unconnected. Sometimes the body has more grey than brown or orange. The head is coppery-red and triangular, or heart-shaped, and is darker above the eye than below.

Copperheads have a pair of fangs that inject venom when they bite, and even newborn copperheads can give a venomous bite. The snake is a pit viper, like our other venomous snakes in Tennessee, and has the characteristic heat-sensing pit present between the eye and nasal cavities; and the eye has a vertical pupil that may expand to round when fully opened.

Habitat: In most of its range the copperhead favors deciduous forest and mixed woodlands. They are often associated with rock outcroppings and ledges, but are also found in low-lying swampy regions. It can also be found in pine forests. Favorite hiding places include stone walls, sawdust, garden mulch or compost piles, and under decaying stumps, in wood piles, under abandoned building debris, and under large flat stones.

Life History: Copperhead snakes are born alive, and are able to reproduce at three to four years of age. Copperhead snakes can mate in both fall and spring. If they mate in fall, the eggs will not be fertilized until the spring, as the females gestate during the summer. They are capable of breeding every year, and give birth to live young from late summer to early fall. As few as 2 or as many as 18 young are produced, but the typical litter size is 6-10 young. The young are 8 to 10 inches long at birth and stay with the mother for only a few days. They are fully as venomous as the adults when born. It is thought the juvenile yellow tail is used as a lure to attract small prey for the youngster. Up to 60 percent of the females in a population may carry young in a year. Several female Copperheads may gather in specific areas prior to giving birth.

Copperhead snakes are social and over winter in dens. Dens are most often in rocky hillsides with southern or eastern exposure to the sun. These “snake dens” will be returned to year after year and may contain a large number of snakes, including timber rattlesnakes and gray ratsnakes. The wintering site is some distance from summer feeding grounds, requiring the snakes to migrate. In October the Copperhead retreats to its underground den to hibernate until late February or early March.

Copperheads may live eighteen years in the wild and more than twenty five years in captivity.

Copperheads have many predators and are most vulnerable when young. Multiple snake taxa, including kingsnakes, racers, and cottonmouths prey on copperheads. They can also be preyed upon by bullfrogs, alligators, American crows, hawks, owls, opossums, coyotes, and feral cats. Humans are a prime predator for copperheads.

Range: In Tennessee, the copperhead ranges throughout. Indeed, its range is throughout the eastern United States.

Additional Notes: Copperhead bites are the most common of the venomous snake bites, probably due to its wide range. Sometimes the bite will be a “dry” bite, in which little or no venom is injected. Otherwise, left untreated, a venomous bite can be very damaging, and anyone bitten must seek medical treatment. Very few deaths occur as a result of copperhead strikes. Copperhead venom is hemolytic, which means that it functions by destroying red blood cells, causing hemorrhaging in animals. However, this same venom is being studied by researchers because it has properties that may be used to “paralyze” cancer cells to stop them from spreading. You can read more from from the Journal of the National Cancer Institute. Copperheads may produce a strong odor when they are touched or disturbed. Non-venomous water snakes, corn snakes, and hog-nosed snakes are often mistaken for copperhead snakes and are needlessly killed.

Behavior: Copperheads are carnivores. Adults mostly eat rodents while young ones eat many kinds of prey, including salamanders, frogs, lizards, small snakes, and insects. During the heat of summer, the copperhead will stay hidden during the day and become active at night. When weather is cool but not cold, this snake will be seen basking during the day. Copperheads select their locations during daylight hours so they can keep their body temperatures between 73.4 degrees Fahrenheit to 87.8 degrees Fahrenheit (23 to 31 degrees Celsius.)

Though they are most often found on the ground, these snakes have been observed up to 5 meters up in shrubs and small trees, probably climbing to find the right temperature. The snake hunts in the daytime during spring and fall, and at night during the summer when its pit heat sensor is crucial to finding prey. Once injected, the prey may be held by the snake if small, or tracked if larger.

Copperhead snakes rely upon camouflage and cover for safety and in order to ambush its prey. When danger is perceived, copperheads will usually freeze in place and remain motionless for the threat to pass. Unless a person steps on them, grasps them, or otherwise comes very close to them, the snake is unlikely to bite. The bite will, however, be readily used as a last defense. An agitated copperhead will vibrate its tail rapidly. Copperheads are good swimmers if need be.

Distribution of the Copperhead in Tennessee 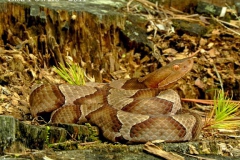 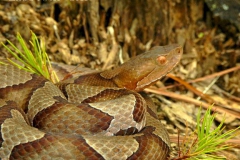 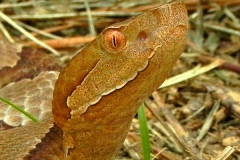 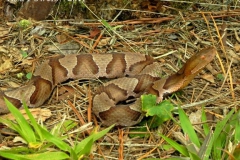 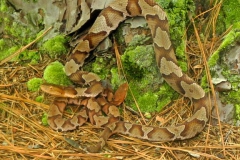 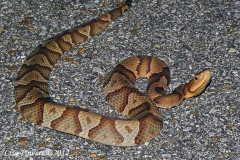 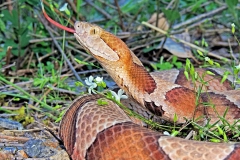 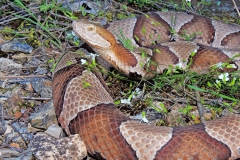 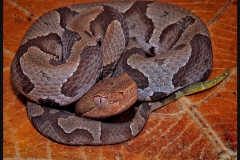 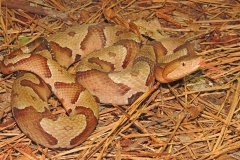 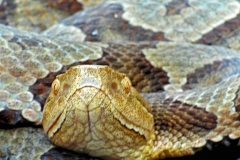 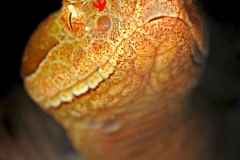 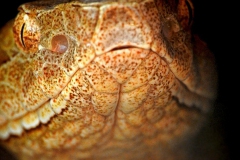 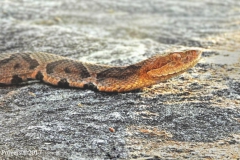 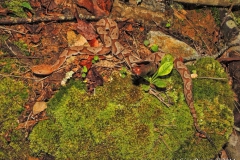 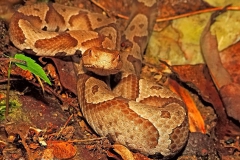 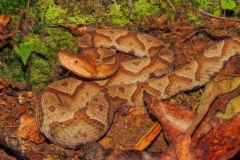 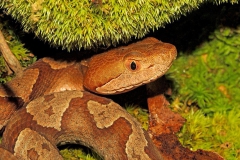 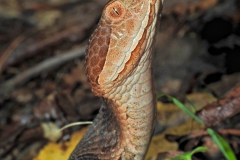 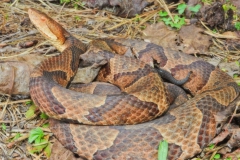 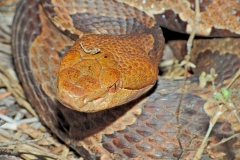 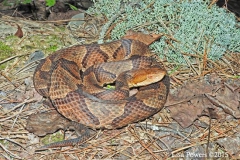 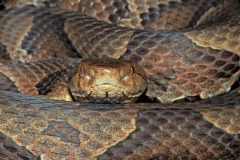 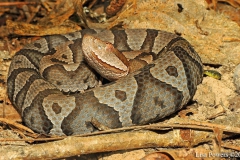 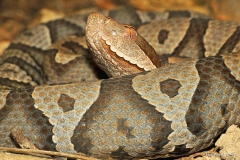 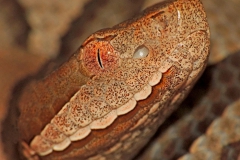 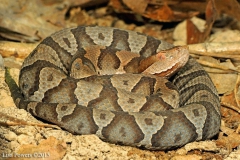